I recently stumbled upon this new(ish) paper, by Benjamin Crost and Joseph Felter published in the June 2020 issue of the Journal of the European Economic Association. This paper shows a plausibly causal link between the export value of agricultural products (e.g. bananas in this case) and violent civil conflict. This is an important and interesting link because decades-old theories of economic development suggest the shift to high-value (and export-oriented) agricultural production is an important mechanism driving economic growth and poverty reduction.

Let’s dig into this bananas paper! (Okay, sorry about that.)

The paper begins with a brief theoretical discussion of the opposing mechanisms at play in the relationship between agricultural value chain development and conflict.

On the one hand, agriculture tends to be relatively labor-intensive and existing theory and evidence suggests that agricultural development can increase employment in rural areas and, in turn, reduce the opportunity cost of conflict. Additionally, if agricultural exports are taxed, the state may have more resources to provide security in fragile contexts.

On the other hand, increased value in the production and trade of agricultural products could incentivize rebel groups to fund themselves by extorting farmers and export firms. This seems to happen in the Democratic Republic of the Congo with artisanal minerals (see excellent work on this by Raul Sanchez de la Sierra).

In this paper, the authors leverage variation in the world price for bananas and geographic variation of the production of bananas in the Philippines. Not all bananas are the same, however. This paper focuses on the Cavendish banana, which is almost exclusively sold for export by a relatively small number of multinational firms including Dole and Chiquita. Other banana varieties—such as Lacatan and Saba bananas—are produced mostly for domestic consumption in the Philippines. So, let’s see this variation in prices and geographic distribution of production for these types of bananas. 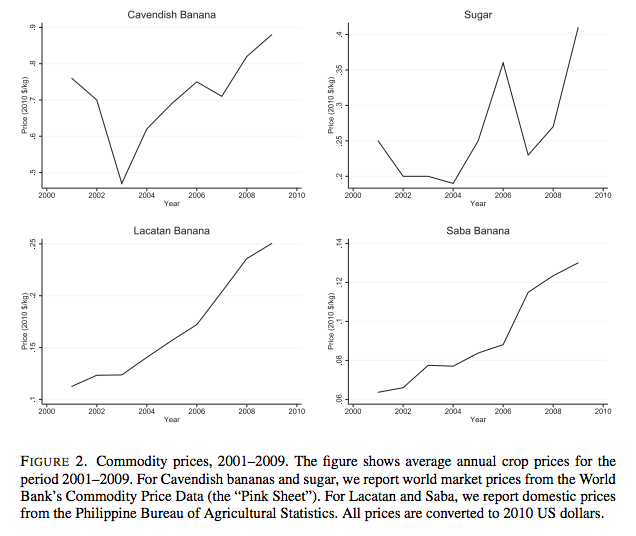 The figure above (Figure 2 in Crost and Felter 2020) shows trends in prices of various varieties of bananas and—for the sake of comparison—sugar. The important detail here is that the price of Cavendish bananas has changed dramatically over time with a steep reduction around 2002 and a just as steep increase from 2003 through 2009. This non-linearity is critical for the credibility of the estimates as they allow to account for changes in unobservable and omitted variables that may influence both agricultural exports and conflict. Price changes in sugar also exhibit a similar non-linear trend, but the magnitude of these price changes is smaller than those of the Cavendish bananas. The domestic banana varieties show a roughly linear increasing trend in prices, which complicates the identification of the effect using these products. 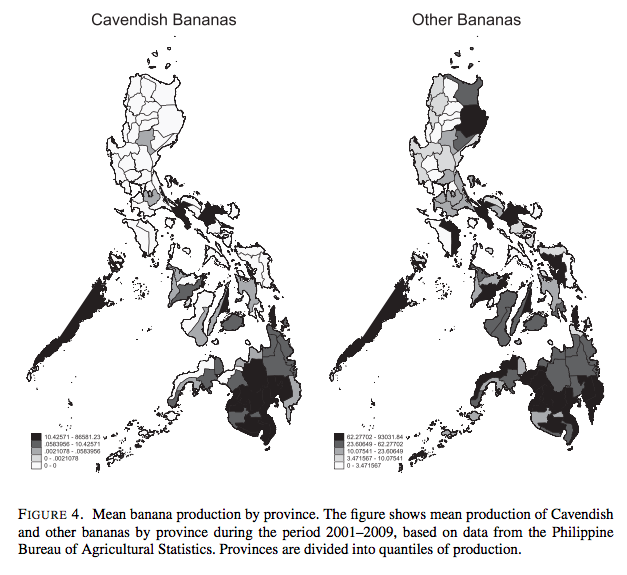 What do the authors find? 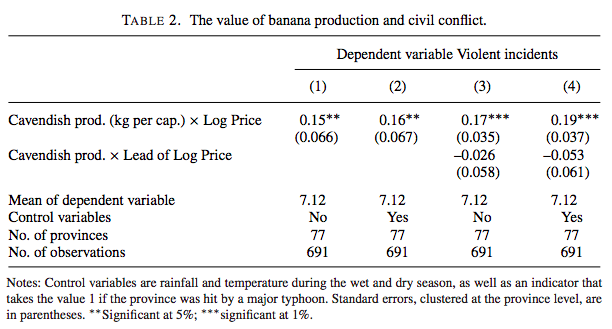 The rest of the paper is really a masterclass of writing an applied microeconomics paper. The authors show the robustness and test their identification assumptions. The effects are not due to differing time trends and the results hold when instrumenting the world price of bananas with rainfall in Ecuador (the world’s leading exporter of bananas).

The authors also explore potential mechanisms that drive their results. The effects seem to be stronger around large plantations with more than 25 hectares relative to smaller plantations. They also find no evidence of a price effect on domestic varieties of bananas or on the production of rice (an important staple crop in the Philippines). Taken together this supports the theory that rebel groups aim to fund themselves by extorting large plantations.

There is way more in the paper. For example, the authors show that increased export crops increases the capacity of established rebel groups and, in turn, reduces the capacity of the state to control and govern its country.

All of this does not suggest that policy-makers should refrain from implementing policies that develop agricultural export sectors. It does suggest, however, critical nuance in expectations and unintended consequences of globalization in fragile and violent contexts.

I’d recommend this paper to anyone interested in learning about the relationship between agriculture, conflict, and development. Also, as I mentioned previously, this paper is excellent example of credible applied research with non-experimental data. I’d consider assigning this paper as required reading in an advanced undergraduate development economics course or a graduate-level research methods course.

View all posts by Jeff Bloem