If you follow Marc Bellemare’s blog or specifically his ‘Metrics Monday series, you will already be aware of our new working paper. The paper is titled: “The Paper of How: Estimating Treatment Effects Using the Front-Door Criterion.” The number of people who are reading this post and who do not already read Marc’s blog is probably very small. So, with that in mind, I will offer a few additional thoughts based on the preliminary work writing this paper.

First, here is the abstract of the paper:

Second, when writing this paper we discussed an interesting thought experiment. Consider the counterfactual world where applied empirical researchers have not yet discovered instrumental variables. In this world, Angrist, Kruger, et al. have not demonstrated the usefulness of using an exogenous instrumental variable to disentangle the causal effect from a statistical correlation. Instead, I told you that I’ve read about a “new” method that can be used to identify causal effects. It only requires that an instrument Z influences some treatment variable X, but is otherwise excludable from the error term in the equation defining the primary outcome Y. Oh, and the correlation between Z and X must be sufficiently strong, there is another (largely untestable) assumption related to monotonicity, and the resulting estimate is this “new” treatment parameter called a “local average treatment effect.”

How would you respond? I suspect most of us would at least respond extremely cautiously and some of us would outright reject this “new” method. Now, keep this thought experiment in mind when reading about the “new” method of the front-door criterion. 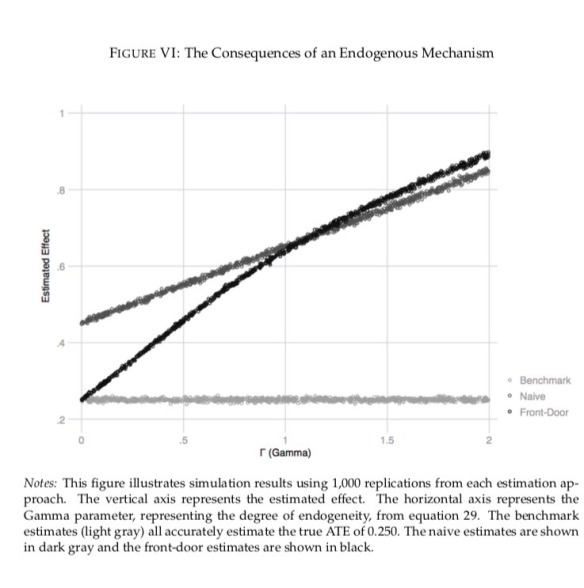 This is still a working paper, and so Marc and I would really appreciate any feedback, comments, or questions you have about this paper. Please feel free to email either of us.