When I was studying at the University of Ghana during a semester abroad; I wrote a paper entitled; “Where We’re going, We Don’t Need Roads: Reconsidering Pan-Africanism”. Here is the opening paragraph:

Even though my Ghanaian professor later admitted he had never even heard of Back to the Future, he was generous enough to give me an “A” on the paper. While the specific thesis of the paper probably still stands (we need to focus on assets rather than the lack there of) my overly cute way of portraying the idea (that modern Africa needs to re-consider recent history in order to succeed in the future) is unfortunately hopeless and leads to a misguided conclusion.

In Kenya the driver sits on the right and drives on the left rather than sitting on the left and driving on the right. I had to learn that just changing the side of the road one drives on changes almost everything about driving. The toggles for the windshield wipers and the blinker are on opposite sides of the steering wheel, one must look over one’s left shoulder while backing up, and left turns are now “the easy turn”.

Furthermore, most cars in Kenya, and the car I primarily have access too has manual transmission. I had to learn how to drive a stick… mostly on dirt roads… or paved roads with speed bumps every quarter mile or less.

In Kenya, motorbikes are the primary mode of transportation; therefore, the roads are teeming with them. After motorbikes, the second most popular mode of transportation is matatu—a fourteen-passenger van usually occupied with more than fourteen passengers. The drivers of these vehicles generally are not the owners; therefore the relative care in which they drive tends to be quite low and reckless. And, oh yea, the roads in rural Western Kenya are generally in terrible condition.

Learning how to drive is only one aspect of my learning and the greater significance of this achievement. Learning what driving in Kenya is actually like is perhaps the more beneficial lesson (at least in the long run).

According to a recent article in The Economist:

“Every 30 seconds someone, somewhere, dies in a road crash, and ten are seriously injured. The toll is rising: the World Health Organization (WHO) expects the number of deaths globally to reach nearly 2m a year by 2030, up from 1.3m now. But the pain will fall far from equally. Rich countries are making roads safer and cutting casualties to rates not seen for decades, despite higher car use. Poor and middle-income ones will see crashes match HIV/AIDS as a cause of death by 2030 (see chart). In the very poorest, the WHO expects deaths almost to triple.”

With many countries in Africa being landlocked (or double landlocked) roads are simply one of the only ways things that are bought and sold are, well, bought and sold. To piggyback an example from the Boring Development Blog, “It costs twice as much to move a cargo container from the south of Mozambique to the north of Mozambique as it does to ship it from Dubai to Mozambique in the first place.” Pause and think about that for a minute… (Ok, welcome back) After considering this reality, it is not hard to grasp that any development initiative—or economic activity for that matter—in Northern Mozambique is hampered before it even begins.

Road safety is of concern in the building and investment of roads. Reports of matatus crashing, motorcycle mishaps, and deadly accidents involving the large coach buses transporting people from Mombasa to Nairobi to Western Kenya to Kampala and back are astonishingly frequent. Even in a place where I am (most of the time) disconnected from the Internet, away from a TV, and rarely read a current newspaper, hearing about a road accident is a weekly occurrence.

A couple weeks ago, on a two hour drive from Kitale to Kakamega with two of my collogues, our car was flagged down my a large crowd surrounding four injured people lying on the side of the road. We had room in our car for one person and transported him to the nearest hospital. What seemed to be a “hit-and-run” was actually a hit-and-too-scared-of-the-mob-to-stop situation. The at-fault vehicle followed us to the hospital to cover the bill of the injured person.

This brings up a corollary point. Mob justice is still “a thing” in Western Kenya. Because nobody expects the police to do anything, people—more specifically groups of people—take justice into their own hands.

So what is there to do?

The obvious goal is for more public spending to be allocated to not only more road building projects, and not only road construction in rural areas, but construction of safe roads in rural areas. This means providing ample space on roads for vehicles to pass safely, concern for pedestrians as they walk beside the road, and traffic laws that are actually enforced. It also means better medical facilities and emergency response teams, better vehicles, and more regulated driver training and licensing.

You may notice that working on projects to achieve the goals discussed above will probably not include pictures of smiling children or a heartwarming microfinance story. No, the kinds of projects that aim to meet the goals discussed above are real development projects. Yes, it is hard, dusty, unglamorous work (that probably doesn’t photograph well) but that is what development actually is in the real world. 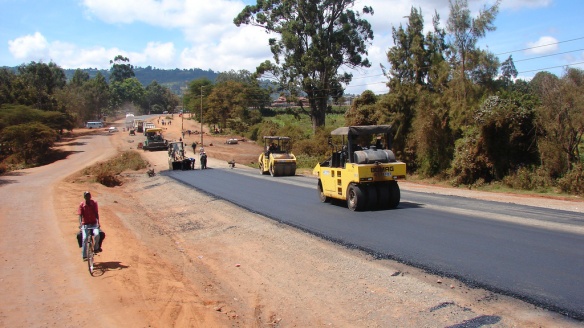 Now, let’s not kid ourselves by overlooking the reality that achieving these goals will take time—a very long time. Is there something that can be done in the meantime?

Well, yes! A study done by researchers from gui2de, the Georgetown Initiative on Innovation, Development, and Evaluation, found that simply encouraging passengers (by using motivational stickers) of matatus and buses to “monitor and govern driver behavior” were “60 percent less likely to have an accident causing injury or death”. This is just the kind of low-hanging fruit that we must pick if we are actually serious about raising incomes and providing universal flourishing around the world.

So if you want more children to be able to go to school, start by ensuring they can actually get there safely. If you want to improve access to clean water, start by allowing construction companies and maintenance teams to efficiently access a community. If you want improve access to quality healthcare, start by being sure that it is possible to get to a hospital in a reasonable amount of time. If you want to help small-scale rural farmers tap urban or even global markets, start by lowering transportation costs. Sometimes when you experience the complexity it all becomes clear: where we’re going, we need roads.

P.S. For those of you now worried about me as I drive on the roads of Western Kenya. I assure you, I am a safe and alert driver. I always have two hands on the wheel and two eyes on the road or mirrors. I never listen to music or even NPR podcasts.

Graph: From The Economist